Northwest Biotherapeutics (OTCQB: NWBO) is one exciting biotech that is easily one of the most exciting stories in small caps that has a history of being heavily shorted including after NWBO recently reported positive top-line results from its phase 3 trial on DCVax®-L for Glioblastoma, the most aggressive type of brain cancer. DCVax®-L has succeeded where well over 400 clinical trials for glioblastoma having failed with data suggesting that DCVax can prolong the lives of people diagnosed with new or recurrent glioblastoma by nearly three months – an exceptional stride towards helping those diagnosed with a brain tumor live longer and better lives. The trial met both the primary and the secondary endpoint under the Statistical Analysis Plan for the trial.  The phase 3 trial particularly succeeded in the “long tail” of the survival curve, where there were more than double the survival rates as with existing standard of care.

2022 was a big year for NWBO with a number of major achievements including (i) reporting what the Company believes are strong positive results from its Phase 3 clinical trial of DCVax-L for Glioblastoma brain cancer, (ii) having the trial results published in JAMA Oncology, a top peer-reviewed medical/scientific journal, and (iii) commencing a major lawsuit to begin fighting back against what the Company believes has been manipulation of its stock. NWBO continues to make quick progress at its manufacturing facility in Sawston as described in detail below and been approved by MHRA giving NWBO the green light to move forward with applying for approval of DCVAX by the EMA which is believed the best way for eventual approval in the US. Positive top-line results from its phase 3 trial on DCVax®-L for Glioblastoma give Linda Powers and her board ample bargaining power to sell NWBO’s proprietary vaccine to the highest bidder.  We will be updating on NWBO so subscribe to Investmillion.com right now by entering your email in the box provided below.

Subscribe to Our 100% Free Penny Stock Newsletter. We Have Something Big Coming! (OTCQB: NWBO) is a biotechnology company focused on developing personalized immunotherapy products designed to treat cancers more effectively than current treatments, without toxicities of the kind associated with chemotherapies, and on a cost-effective basis, in both North America and Europe.  The Company has a broad platform technology for DCVax® dendritic cell-based vaccines.  The Company’s lead program is a 331-patient Phase III trial of DCVax®-L for newly diagnosed Glioblastoma multiforme (GBM).  GBM is the most aggressive and lethal form of brain cancer, and is an “orphan disease.”  This Phase III trial has been completed, and the results have been presented in scientific meetings and published in JAMA Oncology. The Company has also developed DCVax®-Direct for inoperable solid tumor cancers.  It has completed a 40-patient Phase I trial and, as resources permit, plans to pursue Phase II trials.  The Company previously conducted a Phase I/II trial with DCVax-L for advanced ovarian cancer together with the University of Pennsylvania.

Northwest Bio owns a valuable Intellectual Property portfolio that continues to grow and at last consisted of 204 issued patents and 59 pending patent applications worldwide, grouped into 11 patent families. Most of these patents relate to the Company’s DCVax products. NWBO also acquired a number of important patents when they acquired Flaskworks, LLC, a company that has developed a system to close and automate the manufacturing of cell therapy products such as DCVax® NWBO previously obtained Orphan Drug designation for its lead product, DCVax-L for glioma brain cancers. Such designation brings with it a variety of benefits, including potential market exclusivity for seven years in the U.S. and ten years in Europe if the product is the first of its type to reach the market. 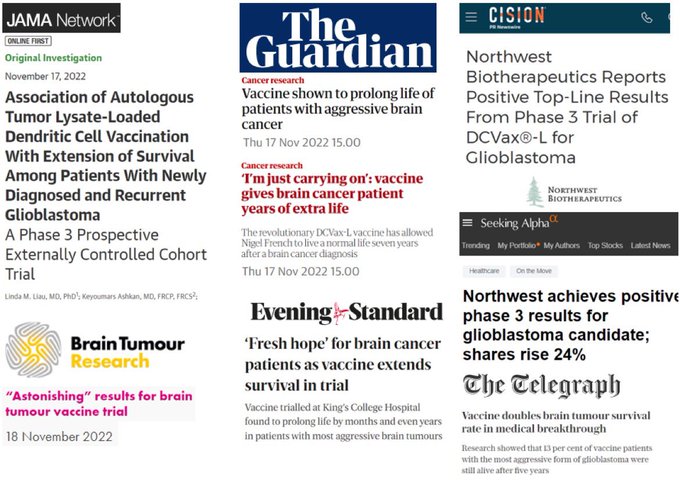 Glioblastoma is the most common and most lethal form of primary brain cancer. The global Glioblastoma Multiforme Treatment market is predicted to be worth US$ 2.3 billion in 2021, with a 7.5% CAGR from 2023 to 2032. Glioblastoma multiforme (GBM) is a malignant tumor classified as grade IV by the WHO. GBM is the most prevalent medically diagnosed oncological disorder of the central nervous system (CNS) and the 10th leading cause of the death in the USA. NWBO filed a lawsuit on December 1 against some of the largest and most influential market makers in the world, including Citadel Securities LLC, Canaccord Genuity LLC, G1 Execution Services LLC (a subsidiary of Susquehanna International Group), GTS Securities LLC, Virtu Americas LLC (including Knight Securities), Instinet LLC, and Score Priority Corp, alleging repeated manipulation of the company’s stock over five years. In the lawsuit NWBO is alleging that these market makers have been engaging in a deceptive market manipulation tactic known as spoofing, which involves placing huge quantities of sell orders to fool the market into devaluing the company’s stock so the market makers can buy at a lower price. The market makers then immediately cancel the sell orders so they can reap profits, in this case to the dismay of current and future cancer patients, as well as at the expense of Northwest Biotherapeutics and its investors. This alleged illegal trading behavior has made it significantly more difficult for the company to raise the funds necessary to bring their cancer treatment to market, where the company believes it has the potential to extend the lives of thousands of patients.

There is a prior SDNY case that is charting the path for $NWBO and will make things 100x smoother for our lawsuit.

Notice that the spoofing claims survived the Motion to Dismiss and NWBO's case is largely based on spoofing. pic.twitter.com/gIoRMvUYzj

To Find out the inside Scoop on NWBO Subscribe to investmillion.com Right Now by entering your Email in the box below 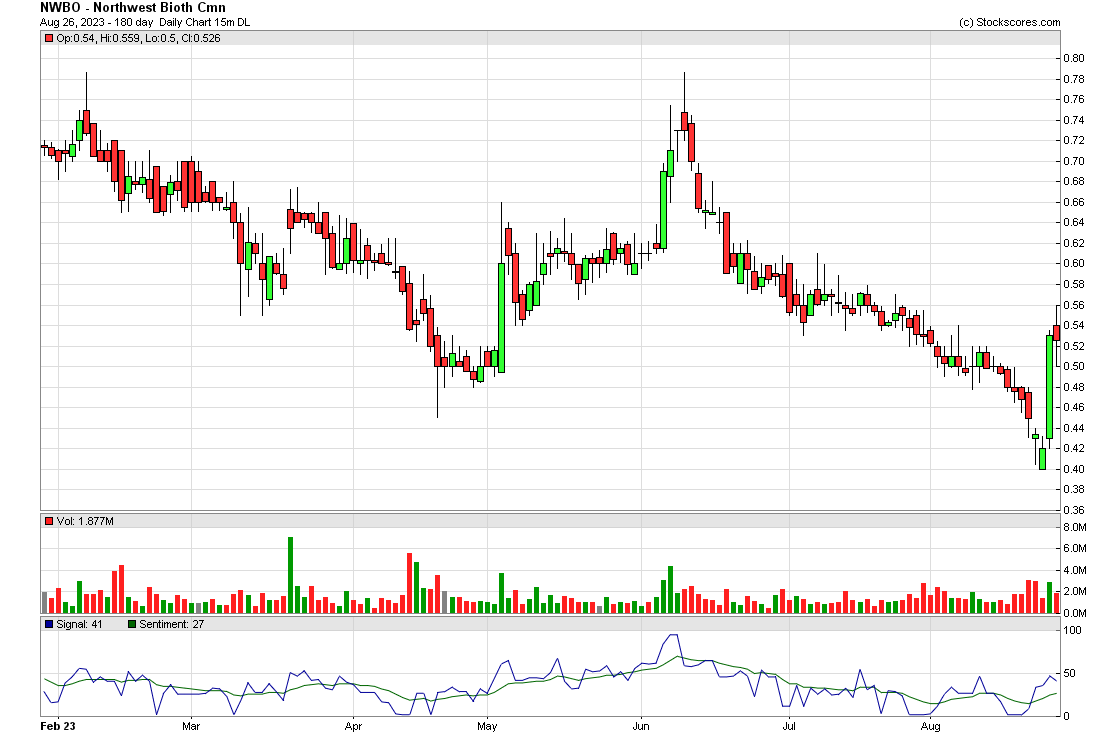 Development continues at the Sawston facility during 2022, with the Phase 1A buildout previously completed and the Phase 1B buildout under way.  Manufacturing of DCVax-L products for patients began in Q1 2022 after manufacturing licenses for Specials and clinical trials was obtained at the end of 2021.  The application package for a commercial manufacturing license was submitted in June, the dual inspection for the commercial manufacturing license and review/renewal of the existing license took place in October, and post-inspection interactions with the regulator continued through year-end.  In parallel, R&D work on the Flaskworks system also proceeded, with multiple versions of the system being evaluated, and with a test system established and operating at Sawston.  In the US, the Company entered into contract discussions for resumption of manufacturing capacity there. The Company also continued process and infrastructure improvements that will be needed for scale-up, including systems to avoid bottlenecks in quality control testing and product “release,” and capacity for controlled cryostorage of millions of doses.

On January 6 NWBO reported positive results of voting at the Annual Shareholders Meeting on December 30, 2022, and discussion at the Meeting about achievements in 2022 and anticipated activities in 2023. At the annual meeting shareholders voted to reelect Ms. Linda Powers, and Dr. Navid Malik to new 3-year terms as well as appointed Cherry Bekaert as Auditor. Shareholders also voted on stock options, management compensation and raising the authorized shares by 500 million.

Northwest Biotherapeutics has big plans for 2023:

Building upon the achievements and progress in 2022, the Company believes that 2023 can be another very strong year.  The first milestone in the New Year is anticipated to be obtaining the commercial manufacturing license, which is one of the pre-requisites for submission of an application for product approval.  In parallel, the top priority and intensive focus will be continued preparation of an application package for product approval, as well as the supporting documentation.  The Company already made substantial progress on the application package during 2022, and the Company plans to submit an application as soon as possible after the pre-requisites and preparations are completed.

During 2023, the Company anticipates that additional key areas of focus will include:

Linda Powers, the Company’s CEO, commented:  “2022 has been a year of major accomplishments, and we look forward to an even stronger 2023.  We are very grateful for the ongoing strong support from our shareholders, as reflected in the exceptional voting results of the Annual Meeting.”

I believe what @JChristianWes is referring to is $NWBO. I say that based on the Intel coming out about the lawsuit and how it plays into the manipulation of $AMC/ $APE / $GME and the market as a whole. The clock is ticking for the shorts, it's not an if but a when. HODL?! pic.twitter.com/VlszzkZxwk

Currently trading at a $772 million market valuation NWBO OS is 1,058,132,006. The Company is an SEC filer and fully reporting OTCQB. NWBO recently reported positive top-line results from its phase 3 trial on DCVax®-L for Glioblastoma, the most aggressive type of brain cancer. DCVax®-L has succeeded where well over 400 clinical trials for glioblastoma having failed with data suggesting that DCVax can prolong the lives of people diagnosed with new or recurrent glioblastoma by nearly three months – an exceptional stride towards helping those diagnosed with a brain tumor live longer and better lives. The short position attacked the day the results were initially presented decimating the share price from $2 to lows of $0.3862, NWBO has come back strong since then recently hitting $1.25 per share followed by more consolidation under $1. NWBO has a significant Internatinal following that does not see these prices lasting for low as the Company continues to gain exposure though national media stories. We will be updating on NWBO when more details emerge so make sure you are subscribed to investmillion.com by entering your email below.

Disclosure: we hold no position in NWBO either long or short and we have not been compensated for this article.