Netlist, Inc. (OTCMKTS: NLST) is making an explosive move up the charts rocketing up 26% on Wednesday on $1.5 million in dollar volume. NLST skyrocketed to over $10 per share in early 2021 and was heavily beaten down in the year that followed recently reversing off $0.871 lows. In December the stock hit highs of $1.53 almost overtaking them today setting pace of the rest of the week; a break over $1.54 and NLST could really take off. The stock has a massive following on reddit, ihub and Stocktwits.

Netlist is one of the most exciting stories in small caps and could well be among its biggest stories in 2023; the Company is embroiled in patent infringement lawsuits against Samsung, Google, and Micron. Netlist originally took off in July of 2020 after the U.S. Court of Appeals for the Federal Circuit affirmed the U.S. Patent Trial and Appeal Board’s decision upholding the validity of Netlist’s U.S. 7,619,912 (‘912) patent that applies to DDR server memory modules.  NLST soared on May 5 after the Judge Richard Seeborg granted Netlist’s motion for summary judgement. The ruling is significant and paves the way for Netlist to pursue allegations that Google Inc. memory servers infringe its patented memory module technology. We will be updating on NLST so subscribe to Investmillion.com right now by entering your email in the box provided above.

Netlist invented the distributed buffer architecture that enables the buffering of data signals along the bottom edge of the memory module using multiple data buffer devices distributed between the edge connector and the DRAM. The result is shorter data paths, improved signal integrity, and reduced latency compared to the industry-standard design for DDR3 load-reduced dual in-line memory module (“LRDIMM”). The Company has designed special algorithms that can be implemented in stand-alone integrated circuits or integrated into other functional blocks in application-specific integrated circuits (“ASICs”). Netlist then utilizes these algorithms in its HybriDIMM product and the NVvault product line to incorporate load reduction functionality.  Netlist believes it was the first company to create memory subsystems in a form factor of less than one inch in height. The Company also develops and uses proprietary heat spreaders to enhance the thermal management characteristics of its memory subsystems.

Netlist holds a portfolio of 130 issued and pending U.S. and foreign patents, many seminal, in the areas of hybrid memory, storage class memory, rank multiplication and load reduction, among others. The strength of Netlist’s patent portfolio reflects its many years of research and development and track record of bringing disruptive new products to market. With state-of-the-art, wholly owned, ISO- and OSHAS-certified manufacturing and testing facilities in Suzhou, China, Netlist’s strategy is to marry its unique board-level intellectual property with a thorough understanding of semiconductor building blocks and system-level applications to deliver performance, cost, and time-to-market advantages to OEMs. Netlist CEO is C.K. Hong, who brings with him over two decades of high-tech management experience to Netlist.

HedgeAppleJoe: had a great take on NLST on the subreddit; pennystocks: To those who are not aware take time to read through the DD that we have on this Reddit page! Click on my name and go back two months and read all the court filings posted. Click on Tomkilla and others names and look at the DD posted openly for all to see. Then realize that last year in June of 2020 Netlist was victorious in a 12 year battle in the patent courts against Google! A 3 judge panel at the US court of appeals, in a unanimous rule 36 decision, upheld the decision of the lower court and found in favor of Netlist. Google “Waived” their appeal rights to the SCOTUS and in February of this year the 912 patent was reissued with 78 claims upheld. Next we won against SK Hynix and now they are our partner. The Hynix deal included a 40 million signing bonus, a 600 million dollar supply agreement at advantageous terms, a patent sharing agreement that gives netlist access to Hynix portfolio of 5000 patents free of charge, and now Hynix is our partner to bring our CXL compatible Hybridimm product to market later this year!! The deal with Hynix is so good that analyst consensus estimates are anticipating a 1400 % to 1700 % increase in EPS in q2!! CFO stated in last annual ER that she anticipated similar numbers of plus 23% on revenue for the first half as compared to 4th qtr last year. Read through this Reddit page do your DD. It’s all here to see with eyes wide open. We own the float and are fighting the good fight so come join us in this battle against Goliath!

$NLST Doc 134 and 135 series redacted PLAINTIFF NETLIST, INC.’S MOTION TO COMPEL DEPOSITION OF JUNG BAE LEE. I need to go back and look at the BOC case in CA but I think this was one of the guys they said was too important testify. What's Texas think!https://t.co/1n6L4fbCxx

To Find out the inside Scoop on NLST Subscribe to investmillion.com Right Now by entering your Email in the box below 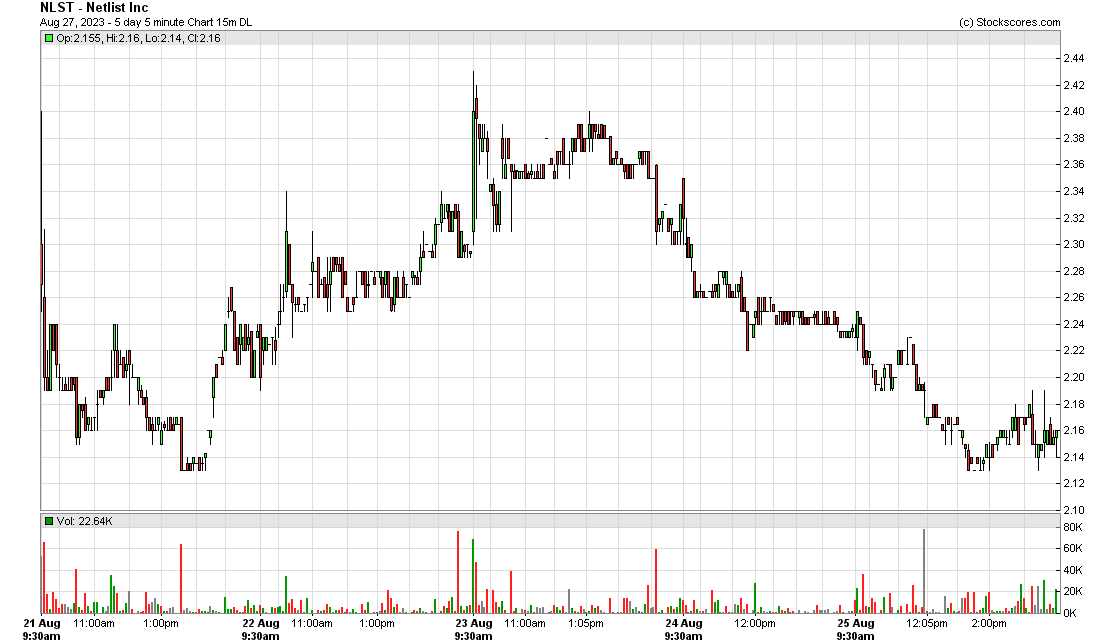 On December 16 Netlist announced the United States District Court for the Eastern District of Texas (the Court) issued a claim construction order in Netlist’s Texas action against Samsung (Netlist, Inc. v. Samsung Electronics Co. Ltd., et. al., EDTX Case No. 2:21-cv-00463-JRG). The Court held the claim construction hearing on November 4, 2022, largely adopting Netlist’s arguments for a number of important claim terms at issue. Following those arguments, the Court acted in alignment with its tentative ruling when issuing the final written Order. The case is currently set for a pretrial conference on March 27, 2023, with the jury trial beginning on May 1, 2023.

Jayson Sohi, Netlist’s Director of IP Strategy, said, “We are very pleased Magistrate Judge Payne entered term constructions in Netlist’s favor for the vast majority of the terms at issue. We look forward to the commencement of the jury trial in May.”

For a more recent post by u/HedgeAppleJoe go here: Jason Sheasby objecting to the Claim Construction on the 060 and 160 patents!! Jason going for 100% victory here!!

Currently trading at a $278,050,776 market valuation NLST os is 233,663,197 shares outstanding. The Company recently reported double digit revenue gains from the year ago quarter and continued to execute on both its product and licensing strategies. Net product sales for the third quarter ended October 1, 2022 were $34.4 million, compared to net product sales of $26.7 million for the third quarter ended October 2, 2021. Net loss for the third quarter ended October 1, 2022 was ($9.6) million, or ($0.04) per share, compared to a net loss in the prior year period of ($10.7) million, or ($0.05) per share. As of the last filing the Company had $23 million in cash in the treasury, $20 million in restricted cash, $77 million in assets vs. $38 million in liabilities. While Netlist traded over $10 per share last year with the same share structure the Company has now and since than Netlist has seen dramatic improvements to its balance sheets. Netlist has been reporting one record breaking quarter after another as the Company’s semiconductor business has more than doubled over the past year. The upside on Netlist is enormous as the aggregate of the multiple infringement lawsuits Netlist is pursuing could yield enormous patent infringement settlements and we could see multiple resolutions within the next 6 months.   We will be updating on NLST when more details emerge so make sure you are subscribed to investmillion.com by entering your email below.

Disclosure: we hold no position in NLST either long or short and we have not been compensated for this article.